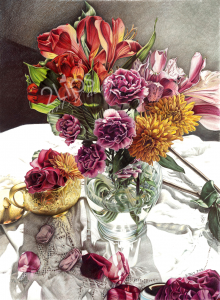 When I began to create my still life I sent the first photo of the finished piece to my parents. My mom thought it was a “nice photo” and my dad explained, “no, Doris, it’s a photo of a drawing.” He carried the photos I sent them around in a little booklet and would show them to anyone he met. My dad used to love to doodle, and when I think back, I truly believe he had some talent. My mom used to say, “well, she must get it from me, because I do needlepoint.”

In February 2003 I had started a large drawing of a vase of flowers with an antique golden sugarbowl. That sugarbowl was that special thing I caught precious glimpses of whenver my mom would open the upper cabinet in the kitchen. Heaven forbid, we certainly never USED it… so far it has graced at least 4 of my drawings so far.

At that time my dad was very ill; he was suffering from congestive heart failure and had quietly made it through the Christmas holidays. He was still driving and getting around, but he was subdued with a look of sad resignation on his face. We dreaded the inevitable and worried about our mom being alone.

On March 1, my mom’s birthday, my father suffered his final heart attack and died. I was away at the time and couldn’t be reached until the next morning while we were on the highway doing 5 miles an hour in a blizzard. As the family gathered for the wake and funeral we moved on auto-pilot.

When we came home to Connecticut I threw myself into finishing the artwork I had started in February. For the next 3 weeks I drew night and day, often until late at night, frantic to complete it. With the last pencil stroke I signed my name, thought of a title, “My father’s light” and collapsed in a heap on the kitchen floor, shrieking with grief. I managed to make it into my bed where my husband woke up and murmured…”I was waiting for this to happen.”

I know how much sweat and tears went into this piece. A broken heart digs deeply to bring something special out of the darkness in the only way I knew how as an artist. I hope that somewhere he knows this was for him. xo