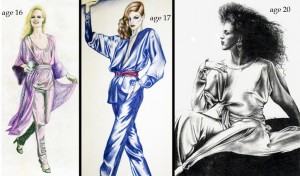 When I was a teenager, I loved drawing fashion from magazines, but was still honing my skill. My high school art teacher introduced me to the incredible fashion illustration of George Stavrinos, whose work for Bergdorf Goodman was found within the pages of Vogue magazine. What an epiphany! His stunning fashion works of art, as they all are, truly left me speechless. His architectural, yet fluid rendering and attention to detail was a visual feast. I was determined to emulate him, as, I reasoned, his style was what I wanted to accomplish. In a few months my work had undergone a drastic improvement. I obtained college degrees in illustration and became a commercial illustrator for advertising and publishing companies over the years, drawing everything you can imagine, from fashion to medical diagrams.

I found fellow Stavrinos fans on the internet and created the Fans of George Stavrinos, Artist & Illustrator  page on Facebook. Many members of the group knew George personally and share their images and stories. I’m jealous!

In 2010, George’s family held an exhibit of his work up in Massachusetts, which I was unable to attend. However, next month, the Society of Illustrators Museum in New York City will exhibit his work, with an opening on September 6th. From their website:

“The Museum of American Illustration at the Society of Illustrators is proud to present The Vision of George Stavrinos on exhibit from September 3 – October 19, 2013, featuring over 100 illustrations highlighting Stavrinos’ career as a seductive draftsman and fashion illustrator. This exhibit offers the public an opportunity to acknowledge this renaissance artist who was gifted as a designer, photographer, filmmaker and commercial illustrator.  His work remains an inspiration for art and fashion today.”

Over the years my journey as an illustrator has taken many different turns, but, I still come back to the wonderful world of George Stavrinos, gone from us far too soon. He continues to inspire us to perfect our draftsmanship and let our imaginations take flight.

Announcing My New Website!!
More than just pictures of flowers

One Response to The influence of George Stavrinos